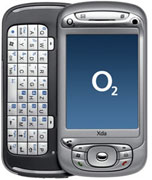 This is the O2 XDA Trion. In a nutshell, it is a Windows Mobile PDA device with phone features. This is my current phone, and have been using it for about 3 months I think. I actually obtained it on the very day O2 released the phone, as it had some real benefits over the XDA Mini-S which I was using before.

As I mentioned in the XDA Mini-S post, one thing that I found really fustrating is that the phone had everything it needed except a good CPU to makes things speed along. Instead it was fustrating too much of the time waiting for it to perform simple operations that I needed. This is where the XDA Trion was a beaming ray of light, as it had all the real benefits of the Mini-S, such as the sliding Qwerty keyboard and the simple fact that it beautifully combines the Windows PDA and the phone into one nice, neat package, but on top of this it has a 400MHz processor instead of a 200MHz, and the inbuilt memory seems to be slightly faster. That makes it pretty much twice as fast, and it is very apparent.

Once I received the phone I was pleased to see that it was a full 3G phone (faster over the air data connection) so that I could syncronise with my MS Exchange server faster at times that WiFi or USB connectivity wasn't available, and also meant that you could make video calls.. but like most people I know.. no one makes video calls.. I did one as a test and thats about it. It still had WiFi access like the Mini-S (which I use a lot whilst lying in bed catching up with emails etc) and Bluetooth which I use all the time for my bluetooth headsets.

So the whole thing seemed to be a big plus all round, hence, not even a hesitation to get it as soon as I was up for an upgrade and it was available.

So here are my opinion on the Pro's and Con's. Bare in mind these are my opinions and will only be appropriate for those that use phones in the manor as I do.